WORKING OUT AT BELLA COLLINA

Stop by our Bella Collina Sportivo Fitness Centre, a full-service fitness facility in the heart of our Bella Collina Community. Try a new exercise class or take advantage of our premium cardio equipment, free weights and TRX suspension training. 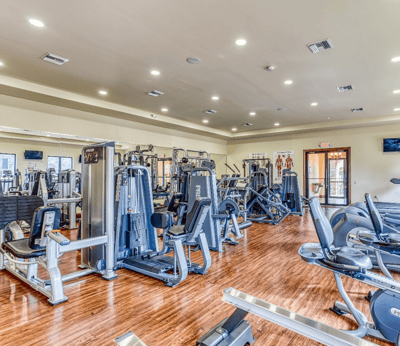 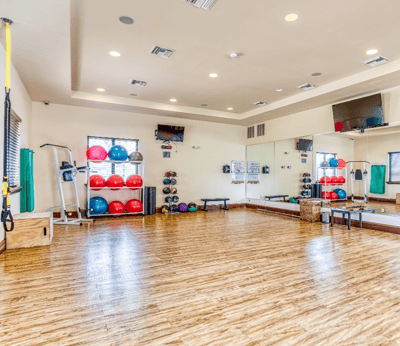 Terri has been teaching fitness classes at the group level for over 30 years.  She began her tenure in this capacity in 1988 at a local gym in Philadelphia, Pennsylvania.  Subsequent to this, she obtained a degree in Exercise Science and possesses numerous certifications, and has completed many advanced training programs in the areas of fitness and wellness.  In 2000, Terri was hired to develop and implement various group training classes for a local gym opening in Clermont, Florida; this is where her love for Yoga began and after being sent to Yoga Teacher Training shortly thereafter, Terri knew the pursuit of the practice of Yoga would be her lifelong ambition.  In fact, this practice became a passion and a way of life for Terri, inspiring her to leave her corporate wellness position for the purpose of pursuing this endeavor full time.  In 2012, she opened a Yoga studio, allowing her the opportunity to continuously study and pass her learnings along to her students.

She currently holds over 1,000 hours in the practice of Yoga, covering various styles of yoga, including but not limited to Yoga Nidra, Meditation, Restore, Hot Yoga, Power, Flow, and Yin.  Since becoming a Yoga Instructor, Terri has had the opportunity to teach yoga to children, adults, and professional athletes alike, both at the private and group level.  Terri is an ERYT-500, the highest level of yoga teaching recognized by the governing body, Yoga Alliance.

Susan started in the fitness world with group exercise classes, mainly cardio classes and strengthening with weights.  Later she discovered Pilates and loved it, especially after having surgery on her Achilles tendon, since most Pilates exercises are done in a seated or lying position.  In 2004, she was certified to teach Mat Pilates.  Later in 2006, Susan was introduced to the Pilates Reformer machine.  She became certified to personal train on the Pilates Reformer and Tower attachment in 2007.  Susan’s reformer and tower certifications are with PHI Pilates and also with SCW.  She has participated in workshops with well-known master trainers: Lawrence Biscontini, Leslee Bender, June Kahn, and Ariel Hernandez.

Susan says, “Pilates has become a big part of my life.  It works out the kinks in my body.  And I’m sure it is something that I will continue to do through the rest of my life.”  Pilates is a great way to round out your fitness program.  Cardio exercises and weight-bearing exercises are very important, but you don’t want to neglect your core.  A house cannot stand without a strong frame and inner support, and neither should you!

Susan currently teaches classes at the National Training Center in Clermont and at The Plantation in Leesburg.

Greg got into functional training out of necessity. He has been doing resistance training since he was 16 yrs. old, but like most young men his early focus was on basic lifts like the bench press, squat, deadlift with a focus only on how much weight he could lift, and make sure he bested his previous lifts 6-7 days a week for years. The inevitable happened he was perpetually overtrained, injured, sore, inflexible, and becoming more UN-athletic. By the time he was 23 years old, he felt more like an old man than someone who should be coming into his prime. His body, mind, and spirit all came back to life. Within 2 months his athleticism was back, aches and pains disappeared, his range of motion was never better, and to his surprise, his strength not only didn’t fade away it was vastly improved. The ability to feel great, perform at a high level in all physical activities, and be as creative as he wants is what keeps him and all his clients loving the training and wanting more.